When it comes to comparing Vivian Maier’s work with other photographers, Helen Levitt comes to me as second to Lisette Model, but strangely for quite opposite reasons.

The kind of people and scene captured in Maier’s work is often close to what Levitt would shot in New-York City, although the people photographed by Maier are often of better standard of living than the ones in Levitt’s work. Anyway these are rather common subject matters for street photography, especially for the period that spans from the 40’s up to the 70’s.

Instead the very common point I find between Levitt and Maier is a tendency to “romanticize” the reality, to make it stage-like, and also to convey empathy for the people photographed (hence why I said the reason is opposite to that of Lisette Model).

In the case of Levitt the situation is more sophisticated than it seems though, especially when considering her favorite subject matter, i.e. children from poor neighborhoods.

With Levitt there is a more or less conscious tendency for setting up a choreography, which includes not only the ability to capture compelling people’s gesture, but also involves a “situational” dimension. By that I mean a specific use of the environment, the elements of cityscape used as backdrop, which is often transformed through her lens into a fantasy scenery or stage for kids game, as opposed to be used as a documentary background. That point is well developed in Sandra Philips essay about Levitt for the SFMOMA book. After her early practice of photography, in the 30’s, and the decisive encounter with Cartier-Bresson of whom she admired the work (and who pushed her to attend Fine Art galleries and look at paintings) she has developed a sharp, focused and conscious sense of composition. And Levitt did most of her career in the direct neighborhoods of her home, she knew well the places she photographed. Her framing is not lousy nor casual but instead is highly rigorous and often conceived in a way that it creates a sense of finite space at the relevant scale for the kids playing – despite the constraints imposed by candid and unplanned shots in urban environment. A consequence of that is that the social and sheer documentary dimensions of the image are relegated to a secondary level, giving the picture a sort of floating, timeless and fantasy vibe.

One of Levitt’s most emblematic shot is – to me – the one with the little girl and two cars (below), shot in color in the 70’s. Not only it is an extremely compelling image but is also paramount of Levitt’s conceptions.

Here the background has almost completely eluded its documentary dimension and comes out as a quasi abstraction. And the “performer”, the little girl, whilst anonymous, shines through an improbable body language. But nevertheless the lack of facial expression, the human dimension and its related empathy is still here, yet very powerful. This picture is a little poem, a masterpiece of ambiguity which we don’t know if it belongs to tragedy or comedy.

By offering such fleeting moments, “decisive moments”, Levitt was one of the then (40’s and onward) important figure of street photography genre to give it a twist and make it distinct from sheer reportage and documentary photography. In that she was close (in my opinion the closest) to Cartier Bresson conceptions, which were nurtured by apprenticeship with painter Andre Lhote, and in some way she worked that out in a more focused manner than the famous French man did. It opened the door to a more elusive, stage-like conception of street photography that later on (although they may not owe that much to Levitt’s stylistic and aesthetic approach) will be pushed much further by people such as Winogrand, Friedlander etc…

The effort put in Maier’s work might not have been brought to the same level of articulation than Levitt. But who knows ? We can only judge today from a recently discovered material which is still largely unknown. Anyway at this stage there is an essential element in Maier’s style which is the seemingly extensive use of square format. I will maybe later on conclude this analysis series in saying that the use of square format was to Maier a strength as well as a weakness – being plenty aware that it may sound like a premature sweeping statement. But if the forthcoming publishing of her work confirms the early impression that she was much more at her ease with the square format than the horizontal and vertical crops (especially the horizontal) I believe this deserves some thoughts. And one thing that comes to my mind by looking at the many shots published from Maier so far is that she tends to make a rather systemic usage or her Rolleiflex. Subject matter is often centered and distance from it varies not much, which is probably a combined effect of square crop and waist-level viewfinder position. This works well for portraiture but shows limitation for other situations.

If one compares the shot above (fig 3.) with the ones from Levitt (fig.1 and 2) we can see the problem posed by the use of square crop in somewhat similar situations. On the Maier’s shot (fig 3.) the composition is well constructed on the scalar motives behind. It is rather brilliantly framed for that matter by the way. But the kids’ group dynamic and consistency suffers from the resulting “square” logic (both crop and motives) whereas Levitt found the relevant place to develop a consistent and ballet-like “story” by combining moment and frame.

Similar things could be said of street portraiture when comparing Maier to Levitt e.g. with the 2 shots below. Here to illustrate the difference coming from using square frame, waist-level view as opposed to horizontal framing. Both are remarkable images on their own right. 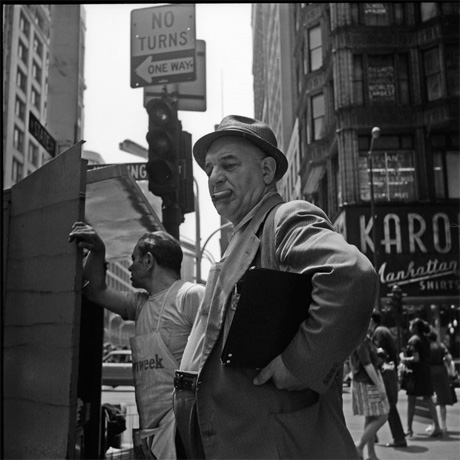 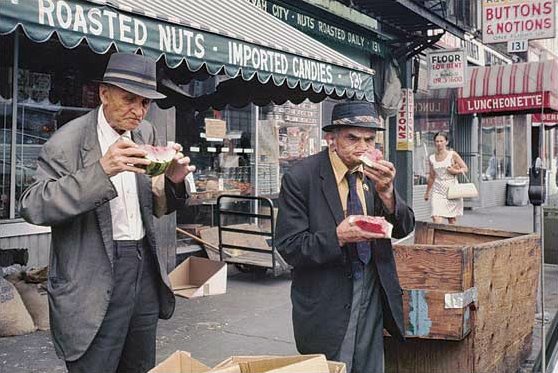 Coincidentally Helen Levitt, who was 13 years older, died just a handful of days before Vivian Maier, in March 2009.

Next: Vivian Maier and Henri Cartier-Bresson.

Yesterday I treat myself when I found and bought a used copy of the SFMOMA book about Helen Levitt on a bookstore downtown Boston. 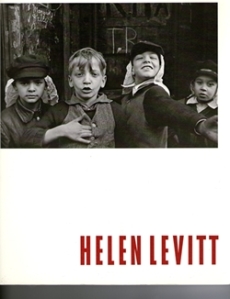 From Levitt I already have the ‘green’ book entitled ‘Helen Levitt’ and published in 2008. She certainly ranks on top of my favorite photographers ladder, because she just did marvelous photographs, and her work is engaging in a peculiar way. She is seriously underrated, compared to – say – Henri Cartier-Bresson.

Besides the photographs – some of which I never saw before – the book includes long essays and Levitt’s biographical data from Sandra Philips and Maria Morris Hambourg that I did not read yet. It also has pictures from other photographers such as Ben Shahn, Walker Evans and Cartier-Bresson to articulate the essays.

Few steps away on another bookstore (*) I also got a used copy of Mark Cohen ‘Grim Street’ which I find is a stunning book but of a totally different universe. Check out the note about it on Colin Pantall’s blog.

There is something fascinating in Cohen’s pictures in that the way he would operate is so intrusive whereas the final result is enigmatic, full of mystery and highly elusive albeit strongly consistent. Very different from Bruce Gilden (who has a similar routine of getting very close and using the flash).

Note (*) the Boston area has so many bookstores, in addition to very good public libraries, not to speak about the University resources, such as the Artistic Institute of Boston.