Reproduced below is an image from South African photographer Andre du Plessis:

I believe this image shares some similarities with the following photo from American Photographer Emmet Gowin: 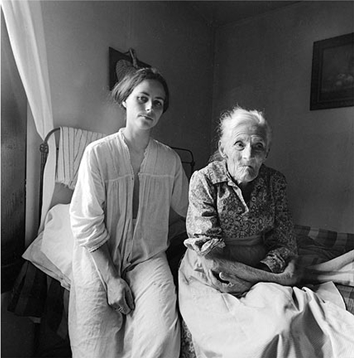 Both images have in common a background formed by the corner of the room. The same sort of things can be seen around, a painting/photo, a wiper/doily.
Despite obvious difference in standard of living both – rather bare – scenery offer same the amount of hints for sheer privacy in a very similar modest manner.

The POV is rather similar as well. I believe that a wider angle was used for the photo by Gowin, but apparent distance from the models and vantage point are comparable – a bit closer in Andre’s image. I don’t do lots of portrait myself but obviously the distance from the model (the apparent distance resulting from the combination of actual distance and lens focal length) is an extremely important factor for good portrait (*)

Despite similarities in the composition and the set-up the “message” coming from these two images are to me rather different. It is not surprising coming from portrait shot, where the personality of model is largely responsible for the impact. But as Andre told me situation are very different here, which is true and I also feel that a major difference is in the photographer deep intention.

I feel that the image from Gowin talks as much of himself as of his relatives shown in the image. Doing family portrait with artistic purpose is a challenge. It involves the artist in a very specific, private and mysterious manner. Emmett Govin is one of those one who apply to this risky endeavor in the long run. It is more than mere family portrait of course and he said something about his wife Edith that she was/is part of his artistic journey, may be not that differently that his mentor Harry Callahan did with his wife Eleanor.

On the other hand I feel that Andre’s concern is more to show the humankind in stranger’s eyes. He has a very important – and not so spread – quality which is humility. In his book “Looking at Photographs” John Szarkowski said about Diane Arbus “The force of her portraits may be a measure of the degree to which the subject and the photographer agreed to risk trust and acceptance of each other”. I think Andre’s portraits has something of that – though not in the Arbus way.

On a further note I’ve been browsing Sally Mann pictures lately and think Govin’s work kind of prefigured what Sally Mann would do later in a more controversial way.

… Now let’s see what Andre was kind enough to write to me about his work and this specific image:

In my work I meet people who I do not know, like one knows friends or relatives. My objective is that the images of those people become something that transcend this void. I want to feel, when I look at the picture afterwards, that these are people that might be strangers, but to whom I feel a kinship, an understanding, and that respect for one another is tangible. None of my subjects are rich (i.e. wealthy), they don’t have the goodies that I have. However, this opportunity to be captured should make them feel special. In this the interaction that I get during these impromptu sessions is always an interaction, in which what is displayed on the LCD screen becomes paramount – they share this with me continuously, and in the process they become excited and cooperative, and loose many reservations / shyness. It is important that they understand that I wish to portray them in an artistic manner, and therefore I sometimes urge them to actively participate in my quest for the correct and sensitive light. On occasions I have had them leading me to sections of their homes where they feel that we can take ‘arty’ pictures, or they have suggested that I return at another time, when e.g. the light in the kitchen will be good at 5pm:) I do prefer direct eye contact, unless I do a double portrait, where I usually try to construct a triangle of energy.

In “Consolation’, there was very little choice of location – what you see here is the whole structure. There is only a door behind me, and as the light was coming from directly behind, and far too strong, I asked some kids who were watching this to collect a table cloth from the house next door and they held this up in the door to shield the light. Shooting in low light, and simply relying on what is available is my modus-operandi. No reflectors are used, and there cannot be too much spontaneity in the image, as the shutter speeds are inevitably quite long. Motion artifacts remain a problem – in spite of me using high ISO settings. The people that I photograph have inevitably never experienced dedicated photo sessions – at most snapshots or having their ID book pic taken at the chemist. So delivering on the promise that I shall bring prints hold substantial importance.

I am a South African, and proudly so. However, in our Kaleidoscope of peoples down there, there are very interesting dynamics. Also – as a white South African, and having always stood to the left politically speaking, this is also I guess a way that I deal with all the years of wrong. So maybe there is a deeper meaning to my work in that respect – I do not know. As far as technicals this scene simply had to be done! Her face is interesting, and the inclusion of her belongings in the back elevates this to environmental portraiture. I do like close-up portraits, but what do they tell me about the person ? After you have seen their eyes, and nose and so on, only a special capture lingers. I used a wider inclusion before, but since joining 1X (note: OneExposure / 1x.com) I have cropped a bit away in the frames – somehow became influenced by the way that 1X sees photography. My own work is less tight, and wider.

Environmental portraiture remains my ideal – and I want to expand my vision in this section. However, that is not really an elective decision that one can make and apply, as every person lends to other opportunities. I prefer darker tones, both from an artistic point, but also for mood – they usually are inter-dependent. The addition of the dog here came as a surprise. The dog jumped onto her lap after the previous capture (‘Feelings’), and thus this frame. The poster of the man makes me think that (as in all of us – dreams are universal), and given the meager furnishings here this single element says so much for me. She is not very happy at this time of her life – financial insecurities, and the relationship neither very strong. Also – where she stays she is regarded as an ‘inkomer’, which means that she moved to this community from elsewhere, and therefore seen as a stranger – and not too welcome.

Note (*) Basic portrait advice for beginners are to focus on the eye and have a not distracting background (neutral bkg or the clutter behind blurred with shallow DOF if necessary). But one thing that really great portraitists have over others is their ability to choose the right distance and to click at the right moment. The 2 images here are to me a good illustration of that point. You have stare as well as body language. You have a coherent scenery, and the distance to the model makes the overall message shine from every corner of the image.