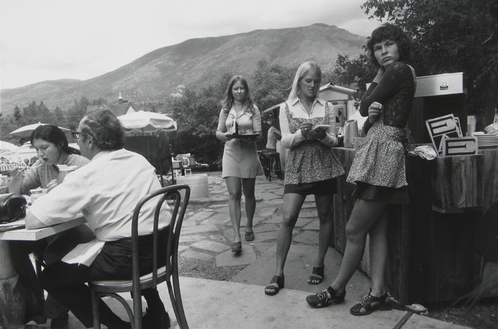 This shot (above) from Garry Winogrand may not be the best of his (women) shots. And indeed at first sight it looks not far from what the average Joe would come up as a lousy tourist snapshot from a restaurant terrace. But I think it has some strong characteristics of Winogrand’s peculiar style. More specifically it shows Winogrand’s ability to have a pivotal subject to further explore “how things look like photographed”. What do we see the first here ? The girl on right/foreground I believe, she’s pivotal. But why ? Whereas when the aforementioned “average Joe” would certainly have centered subject matter (and zoomed it if possible) what we have here is a quirky distribution of different elements in frame all cohesively tied by gestures and expressions captured. Also it is to be noticed that the tree maiden could be seen instead as a sequence of the same girl doing different things at different moments… which is absolutely brilliant (reminds me a sketch out of “Tintin et le Crabe aux pinces d’Or” from Hergé where he used a similar procede). Finally the resulting image is closer to a stage with performers with a role assigned to each of them. Winogrand was very good at that, achieving cohesive and vaudevillesque choreographs within the frame of a photograph. 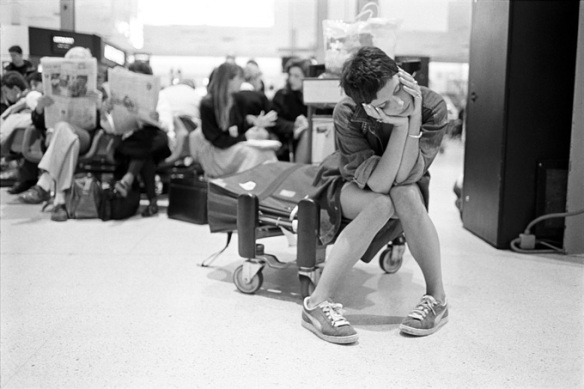 The picture above from David Solomons is more crafted in some way. Better said it is more “photographic” in a sense that it is an obvious result of a photographer’s well developed skills and the techniques involved (choice of wide angle lens, point of view, DOF…). It is craftily composed in a way that there is few risk for the viewer to be distracted from the main subject matter. But it includes enough of the context to make it an interesting shot that undoubtedly falls into the street genre (on a further personal note I have to say I really love the capture that I find fantastic, the kind of shot I’d be proud to have in my PF)

Winogrand’s was often accused of machismo/sexism. If any I think the sexism in this specific photograph lies more in the facts basically described rather than in the photographer’s intention. In that way it is different from many other women pics from him that can be said the exact opposite. But this one is as closer as to what Winogrand would refer as “female energy” – arguably to defend himself from the accusation of being macho.

The photo from Solomons is to me devoid from the controversy Winogrand would face about his women shots. It is somewhat asexual – one could say it has some political correctness for that matter. The Jean Seberg haircut is a little responsible for that (plus that together with the b+w rendition it give some retro vibe to the image that I personally find nice) but it is more because there is few in the picture (i.e. what the people are doing, are looking like) that can considered controversial or better said aggressive with relation to gender – unlike in many Winogrand’s shot about women. In other words it has vitalness but no aggressiveness (by the way some of Winogrands’ airport shots have similar vibe)

Though rather different in composition and “mood” I believe both images share crucial characteristics.

There is of course similarity in subject matter. In both cases you have women shown in public space whereas the other people captured in the frame emphasize the mundane context of the shot. That is the older couple on left in Winogrand’s pic, enjoying a lunch, or the people on background in Solomons’s shot, reading newspaper – which is the typical thing to do in boarding/waiting room. In fact both images are somewhat about boredom and the resulting waste of energy around. But furthermore you have the main character of both shots (i.e. the girls) who stands nearly as the narrator, or better said the medium between the situation described and the viewer (as opposed to other folks who are immersed in the scene and don’t seem to be upset from it). Also their attitude indicates that they react (both in very different manner) against the boredom stat of fact. There is great body language in both pictures, that serves well this idea. It is that sort of negative juxtaposition that makes most of the tension and impact here.

About David Solomons:
David Solomons is a remarkable contemporary street-photographer. Beyond an obvious eye for the everyday little and unnoticed drama he shows a solid and witty sense of composition – without which the image hardly takes off from the mere anecdote.