One funny thing when doing street photography is that you may notice some other street photogs operating. I live in an area where lots of people are doing photographs outside (lots of tourist around and inside the Harvard yard etc…) and also it seems that there are bunches of street photogs out there. So the chance to be photographed candidly is relatively high in the area. Being aware of that can be funny and furthermore might grant you with some nice contact.

Indeed I happened to be photographed more than often.  Reproduced below are shots I did that witnesses some of these situations.

#1/ Two Japanese girls that took a picture of me in front of the John Harvard statue. After the shot I did they asked me to pose with them.

#2/ The guy who looks angry at me is in fact a regular long-time bostonian street photographer. He was not angry at all but came to ask me which camera I use. We had some chat and now we see sometimes bump to each other when I am hanging out at Down Crossing/Washington street (downtown Boston). I believe he captured me more than once. Hi John if you read this !…

There are lots of street photographers in that place so if you come here in Boston and want to be photographed candidly this is the place to go.

#3/ The girl on the background is smiling at me. She was doing some street photography as well and a few minutes before she captured me juxtaposed with a poster I think…

#4/ This one is a shot that I really like… But I don’t know what kind of photograph she finally came up with with her point-and-shoot. 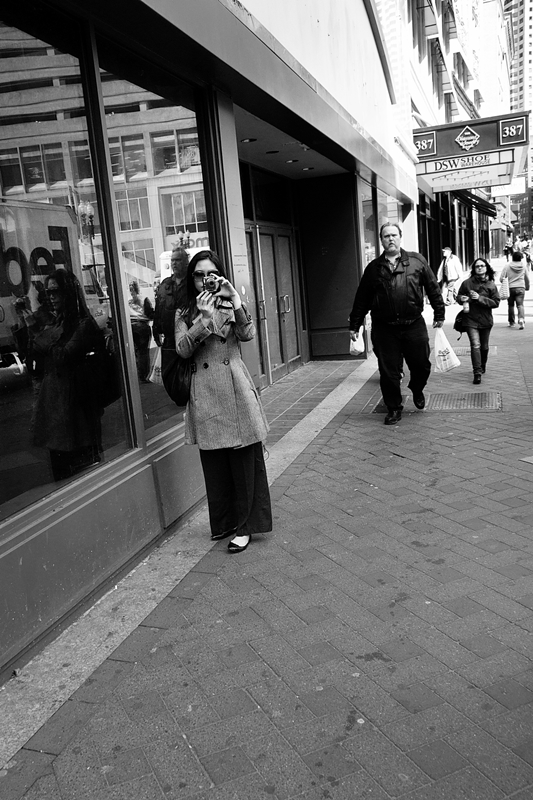 3 thoughts on “I’ve been photographed…”